The event_route is offering a framework for developers to give script writers more control when special events happen. Unlike the other routing blocks which were designed to process SIP messages, the event_route can be triggered by a non-SIP-related event as well.

Another event_route is exported by tm module: event_route[tm:local-request] - which is executed when tm generates internally and sends a SIP request. Such cases are:
Examples of usage:
Among the benefits of event_route:
For the future I expect several events to be added, for example:
Next episode to be about: topology hiding module.
Posted by Daniel-Constantin Mierla at 3:51 PM No comments:

Kamailio (OpenSER) 3.0.0 provides two new routing block types:
R-URI or routing headers might have domain names and the DNS resolver is hidden behind functions like t_relay() or forward(). Moreover, there is pretty quite complexity in selecting the next hop by strict or loose routing, outbound proxy address and R-URI address which tied with DNS failover made the options to get the destination address in config impossible with older versions.

The newly introduced onsend_route comes to fill the gap. The actions in this routing block are executed just before sending the message to network, meaning:
A new set of pseudo-variables and keywords are made available:
Not all functions exported by core or modules are available in onsend_route, however, you can drop the request, access message flags, use transformations over the output buffer and more. msg:len keyword returns the length of the message to be sent, not the length of original message.

The typical usage is to implement outgoing filtering, a good option to protect against DNS poisoning and malicious DNS records:

Posted by Daniel-Constantin Mierla at 4:25 PM No comments:

Almost 2 hours of recording, going from overview to deep technical concepts, I can even say, a great tutorial about Kamailio in some aspects.

More details and the podcast available at:

Posted by Daniel-Constantin Mierla at 12:15 PM No comments:

The most important change, comparing to Kamailio (OpenSER) 1.5.x (or older), in regard to TLS is a new internal architecture - the core is no longer dependent of SSL libraries.

If in older versions, enabling TLS means to recompile everything, with TLS=1 flag for Makefile, in Kamailio (OpenSER) 3.0.0 TLS implementation is provided by a module, named tls.
Yes, now enabling TLS is as simple as just loading a module and configure it via modparam:
Coming as well with support for server name extension, another feature that worth to mention is the option for a dedicated config file for TLS parameters.

Moreover, the new architecture offers far better performances, as it is reusing lot of TCP enhancements, getting to tens of thousands TLS connections in a single SIP server is easier than ever.

Next in this series: onsend_route.
Posted by Daniel-Constantin Mierla at 11:51 PM No comments:

With increasing of instant messaging and presence traffic, ability to handle in a reliable and fast fashion the TCP processing in SIP networks became mandatory.

Thanks to Andrei Pelinescu-Onciul, the one that wrote the first (and the second, and the third, ...) line of code for SIP Express Router (SER) (of course that extends to Kamailio (OpenSER) or other variants), Kamailio 3.0.0 introduces asynchronous TCP processing, via sip-router.org core framework.

This is not the only improvement to TCP, practically TCP has been refurbished if you compare it with Kamailio 1.5.x or older. A lot of new parameters that help you tune TCP processing performances that came along with a better internal architecture:
http://www.kamailio.org/dokuwiki/doku.php/core-cookbook:3.0.x#tcp_parameters

Next post in this series will be about TLS improvements.
Posted by Daniel-Constantin Mierla at 8:46 PM No comments:

Along with Kamailio (OpenSER) 3.0.0 you will get a command line interface: sercmd. Installed on same directory as kamailio binary, sercmd enables admins to connect to running instance of Kamailio, either on same or remote system.

First, you have to load the ctl module in your config, see module's readme:
http://kamailio.org/docs/modules/3.0.x/modules/ctl.html

If you use default configuration in the ctl module and sercmd, with kamailio on the same system, then just launch sercmd. 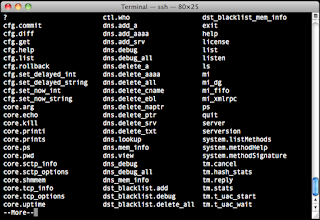 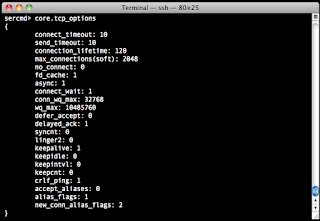 Next post to be about asynchronous tcp.
Posted by Daniel-Constantin Mierla at 10:39 PM No comments:

Inherited from SIP Express Router (SER) via sip-router.org project, the cfg variables framework can be used by Kamailio 3.0.0 core and by the modules, to get and set internal variables on-the-fly, eliminating Kamailio restarts whenever it is possible. Such variables can be global or module parameters.

The operations with cfg variables can be done at any time without performance overhead. The framework makes sure that the variables do not change during the SIP message processing, the child processes see a snapshot of the variables with constant values. The variable that is changed will be automatically replaced by the framework the next time a SIP message is started to be processed.

The drivers can change the values of all the variables by names with or without the need of commit. That means a kind of transaction support, the framework can keep track of the changes (per driver) until they are committed or rolled-back.

New configuration values can be declared in the script, with following syntax :

The values can be accessed via select calls:

Next episode will be about sercmd.
Posted by Daniel-Constantin Mierla at 11:05 AM No comments:

So far, the routing blocks defined in Kamailio (OpenSER) configuration file could get only integer IDs, for example:
That could make the big configs hard to understand after a while, when was need for troubleshooting or enhancements. It was a nightmare to check what route[24] was intended to do when you encountered the execution of it in another route.

In version 3.0.0, along with integer IDs, you can give string IDs to name the routes:
Previously, many people, including myself, used a text preprocessor like M4 to have string IDs for route names, but with some disadvantages: more files to manage (at least two m4 and one cfg), you had to edit all the time the m4 file, compile it with m4 in cfg, then the errors were reported by Kamailio relative to cfg file, resulting in mismatch of error's line number and the place you had to edit for fix.

However, the new embedded features with string names for routing blocks eliminates the restriction of up to 60 (40 in older versions) route blocks where the IDs must be in between 1 and 59. Instead of static array, the routing blocks are now in a hash table, allowing as many routing blocks as you need, with no constraints in naming.

Moreover, the string IDs can be used for any kind of routing block: route, failure_route, onreply_route, branch_route, ...

To call a route block, use the string name instead of integer ID:
The default configuration for Kamailio 3.0.0 uses this new feature: see it online .

Worth to mention that you can define now names for SIP message flags as well:
Next writing will be about new config parameters framework.
Posted by Daniel-Constantin Mierla at 10:04 AM No comments:

The need of switching on or off features in Kamailio (OpenSER) 3.0.0 config file became more handy by addition of #!define directives support. There are five pre-processor directives:
Combining them, you can make parts of configuration file to be ignored at start time. For example, you can have in config a lot of xlog lines to help you troubleshooting, but you do not want them in a normal production environment. In your config you can have:
To run in debug mode, add next line at the top of configuration file and then restart:
For more examples, see Kamailio 3.0.0 default config file - authentication, NAT traversal, presence functionality, ... can be enabled or disabled via #!define.

Next to write about is route blocks with names.
Posted by Daniel-Constantin Mierla at 9:32 AM No comments:

I'm starting a series of posts, to highlight the best new features in Kamailio (OpenSER) 3.0.0, of course, from my point of view, hoping to cover most of them before full 3.0.0 is out (RC3 was done yesterday).

First one to write about is the include_file support. Over the time, with addition of new features, the config file got bigger and bigger. Being in consultancy business, I have hundreds of config files and deployments to maintain. In terms of structure, there are some parts repeating in most of configs, like:
Every time I did an improvement, I had to update in all configs. Now, using the include_file, maintenance is much easier. Practically, you can break down the config in many files and have the master config just including them. For example, split of sanity checks:

Now, at the top of main route block in each config, I include the 'kamailio-sanity.cfg' file:

kamailio.cfg:
Note that you can use include_file anywhere in your config file - included file must contain valid config statements for the part where is included (e.g., global parameters, modules loading, module parameters, routing actions, etc.).

Next is going to be about #!define support, which completes perfectly the include_file feature to ease the maintenance, troubleshooting and development of config files.
Posted by Daniel-Constantin Mierla at 1:29 PM No comments:

Lot of fixes to packaging, code and documentation have been committed since RC1, Kamailio 3.0.0-RC3 becoming ready for pre-production phase.

If you like to work with source, then use the tutorial guiding the installation of Kamailio 3.0 branch from GIT repository:
http://www.kamailio.org/dokuwiki/doku.php/install:kamailio-3.0.x-from-git

Two wiki pages were created to collect what is new in Kamailio 3.0 and how to migrate to this version:

This is the last RC before full 3.0.0 relase. Please report any issue you find to sr-dev at lists.sip-router.org.

Posted by Daniel-Constantin Mierla at 7:02 PM No comments:

Thanks to Andrei, daily snapshots of sr_3.0, kamailio_3.0 and sr master branches can be downloaded from:

Note that new tarballs are generated only if there are changes for the corresponding branch (so if you don’t see a tarball with today’s date it means there was no change from the previous one).

The tarballs are generated via make tar, which makes sure the correct repository version will be included in the compiled binary (make tar generates first autover.h before creating the archive).

Posted by Daniel-Constantin Mierla at 7:37 PM No comments: