Here we are, the 10th edition of Kamailio Awards granted for the activity related to Kamailio and Real Time Communications during the previous year, respectively 2016. Continuing the tradition, there are two winners for each category, also past winners were skipped from initial selection. 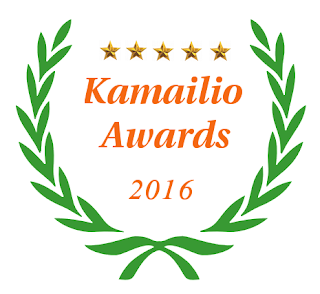 As a side remark, this edition was a bit postponed as I was considering to do a different kind of awards given that last year Kamailio project celebrated 15 years of development and this is the 10th edition of the awards, but finally went for the classic fomat, leaving the special edition for another occasion in the near future.

The 2016 was filled with plenty of important events, from the release of Kamailio v4.4.x series in March 2016, to Kamailio World 2016 in May and the celebration of 15 years of Kamailio development in September, along with the participation to other world wide events such as Mobile World Congress, Fosdem, Astricon or Cluecon.

The 2017 is keeping up very well so far, the major release series for Kamailio 5.0.x is out, Kamailio World Conference 2017 is like a month and a bit away. The next major release series, respectively v5.1.x, looks very good so far, after one month of development there are three new modules, and another one waiting for merge in the review process of a pull request. Definitely keep an eye on Kamailio project during this year, a lot of new stuff is cooking right now!

Back to the awards, here are the categories and the winners!

This is it for 2016. If you want to check the previous turn of awards, visit:
Looking forward to meeting many of you soon in Berlin, during May 8-10, 2017, at the 5th edition of Kamailio World Conference & Exhibition, an opportunity to discuss face to face with Kamailio Project developers.

Note: I am solely selecting the winners, with no involvement of Kamailio project members, based on what I observed and has risen my interest during 2016.  Also, a rule that I try to enforce is that a winner of a category in the past will not be awarded again same category (a winner one time is a winner for ever).
Posted by Daniel-Constantin Mierla at 9:38 PM No comments: 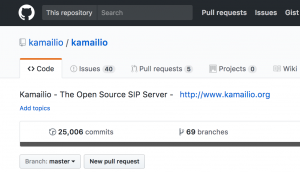 While number of commits is not necessarily a metric of the quality of code, it does reveal a constant and consistent development effort performed during the past 15 years and a half, averaging over 1500 commits per year (n.r., last years with way more commits than the early one due to increase of the number of contributors).
The growth of Kamailio development isn’t slowing down at all. The last major release, Kamailio v5.0.0, was out about one month ago and since then we have 3 new modules already part of the master (topos_redis, ims_diameter_server and call_obj modules) and one is pending to be merged being now a pull request (keepalive module).
Many thanks to all developers and users that contributed to enhance the set of features, quality and stability of Kamailio over all these years!
Should you want to meet face to face with many Kamailio developers, be sure you reserve in time a seat at Kamailio World Conference, Berlin, May 8-10, 2017!
Posted by Daniel-Constantin Mierla at 9:38 PM No comments:

It is today one month since the release of a new major version for Kamailio SIP server, respectively v5.0.0, one with a consistent set of new features and enhancements:
Among its brand new features is the ability to execute JavaScript (ECMAScript) code embedded inside kamailio.cfg script — this is possible via app_jsdt module. The module relies on DukTape JavaScript engine, which is imported in the Kamailio source code, therefore it has no external library dependency.

It is also possible to use JavaScript to write entirely the SIP routing blocks for kamailio.cfg via KEMI framework, offering a more extensive language to control how next hop is selected. Next are the links showing such example:
Among app_jsdt module features:
More about configuration file engines for Kamailio 5.0 will be presented at the next Kamailio World Conference, May 8-10, 2017, in Berlin, Germany. See you there!
Posted by Daniel-Constantin Mierla at 2:48 PM No comments:

The event structure of the Kamailio World 2017 (May 8-10, in Berlin) has been published along with a selection of the conference workshops and presentations. It is going to be agin a balanced content, combining sessions on how to use Kamailio, sharing knowledge on security and scalability as well as presentations about related tools and applications from the Real Time Communications area.

You can see more details at:
Soon the first version of the schedule should become available, keep an eye on the event website!
Thanks for flying Kamailio!
Posted by Daniel-Constantin Mierla at 10:18 AM No comments: