Silicon Allee - an initiative by Schuyler Deerman & friends tries to setup a monthly meeting for people living or visiting Berlin area to exchange ideas and discuss the future of technology.

Even I am unable to make it to the first meeting (March 7, 2011), I am looking forward to seeing the evolution of this initiative and participate to the next ones. 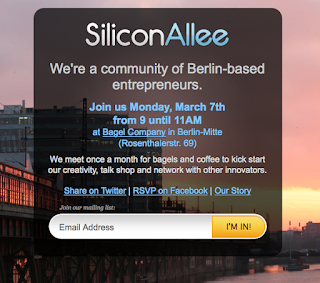 Posted by Daniel-Constantin Mierla at 12:04 AM No comments:

UC Expo 2011 takes place in London, UK, between March 08-09, 2011. I will be present this year as well at the event, meeting many of our UK customers base that will exhibit at the show.

UC Expo describes itself as the show mirroring the diversity of Unified Communications by bringing together all the key technologies and key people of this rapidly evolving world.

If you want to meet, feel free to contact us:

Posted by Daniel-Constantin Mierla at 11:55 PM No comments:

The exhibition has dedicated pavilions for Telecommunication Industry, from equipment providers to software integrators. Asipto is glad to see several customers exhibiting there and we will be delighted to meet and discuss with the other participants at the event, as well.

If you want to schedule a meeting during the CeBIT 2011, don’t hesitate to contact me:

Posted by Daniel-Constantin Mierla at 11:48 PM No comments:

Here we are, the 4th edition of Kamailio Project Awards, granted for activity during 2010.

The past year was full of events and achieved very important milestones set for our project. First of all was the release of version 3.0, the first as a result of the integration between Kamailio and SIP Express Router (SER), the two being since then one application - see more about 3.0 release here.

More over, another major release was done in 2010, v3.1, worked out by an enlarged development team, brought a big list of new features, including full asynchronous network communication (even TCP and TLS) - see more about 3.1 release here.

All together, 2010 was great, therefore the awards got two new categories - Innovation in Communications for those using Kamailio for services beyond voice and Academic Environment for using Kamailio in research and educational networks.

I was not able to list everyone I wished, trying to stick to the tradition of having each of the category with two winners, listed in alphabetic order. As a rule, I tried to choose people and companies that were not selected in the past editions, but of course I want to thank to everyone contributing to and using Kamailio during 2010.

Blogging:
Related Projects:
Technical Support:
New Contributions:
Developer Remarks:
Advocating:
VoIP Services:
Business Initiatives:
Events:
Academic Environment:
Innovation in communications:
As of Personal Facts related to the project, this time I want to underline the release of several complete tutorials, such as: integration with Asterisk or FreeSwitch, scanning attacks protection or SIP SIMPLE Presence server - see all of them at:
This is it for 2010. If you want to check the previous turn of awards:

Posted by Daniel-Constantin Mierla at 9:50 PM

Call Center World 2011 is taking place in Berlin, Germany, Feb 21-24, 2011. Localized in the same city with Asipto, the event is a great opportunity to meet and discuss our latest offerings and developments.

Strictly related to the topic of the congress, our load balancing and security solutions are ideal for scaling and guarding IVR systems.

We will be around as usual during these days, feel free to contact us if you want to meet:

Posted by Daniel-Constantin Mierla at 11:53 PM No comments:

Fosdem 2011 edition was again very successful. The only problem that comes (naturally) to this event: it started to be very crowded, making a challenge to attend any kind of speech there.

For me was the opportunity to meet with many folks around Kamailio project and VoIP, most of them known from past editions, but every time I return from Brussels with a bag of new connections.

Saturday evening we had the traditional Kamailio dinner (we should turn it next year in Open Source Telephony dinner), this time in a fancy restaurant, but with very tasteful menu choices.

During the days we tried to use the breaks at maximum and discuss a bit about the future development in Kamailio and what is new in the VoIP world.

In the Open Source Telephony Devroom, Kamailio had two presentations:

Posted by Daniel-Constantin Mierla at 10:23 PM No comments:

Kamailio SIP Server v3.1.2 stable is out – a minor release including fixes in code and documentation since v3.1.1 – configuration file and database compatibility is preserved.

Kamailio (former OpenSER) 3.1.2 is based on the latest version of GIT branch 3.1, therefore those running 3.1.0 or 3.1.1 are advised to upgrade — there is no change required to be done to configuration file or database.

Source tarballs are available at:

Binaries and packages will be uploaded at:
http://www.kamailio.org/pub/kamailio/3.1.2/

What is new in 3.1.x release series is summarized in the announcement of v3.1.0:

Posted by Daniel-Constantin Mierla at 8:58 PM No comments: