The 8th edition of FUSECO Forum conference is organized by Fraunhofer Fokus Institute in Berlin, during Nov 9-10, 2017:
The event’s chairman is once again Prof. Dr. Thomas Magedanz, from TU Berlin and Fraunhofer Fokus.

This year’s event will again feature three dedicated tracks consisting of tutorials and interactive workshops on the first day, namely:
The second day features a full-day conference uniting these topics under one umbrella „The 5G Reality Check: 5G-Ready Applications and Technological Enablers for 5G Implementation“.
Daniel-Constantin Mierla, co-founder Kamailio project, will participate to the event, being part of the panel “Practical Experiences in Moving to NFV Infrastructures and Open Challenges” during the first day. The agenda of the two days is available at:
Fraunhofer Fokus is the place where Kamailio Project was started back in 2001 (as SIP Express Route, aka SER), a research institute in next generation communication technologies. If you want to learn about what’s going to happen next in RTC, this is a must attend event.
Besides using it in research projects, Fraunhofer Fokus Institute keeps close to Kamailio project, hosting and co-organizing all the editions so far of Kamailio World Conference.
Thanks for flying Kamailio!
Posted by Daniel-Constantin Mierla at 5:01 PM No comments:

Kamailio SIP Server v5.0.4 stable is out – a minor release including fixes in code and documentation since v5.0.3. The configuration file and database schema compatibility is preserved, which means you don’t have to change anything to update.
Kamailio v5.0.4 is based on the latest version of GIT branch 5.0. We recommend those running previous 5.0.x or older versions to upgrade. There is no change that has to be done to configuration file or database structure comparing with the previous release of the v5.0 branch.
Resources for Kamailio version 5.0.4
Source tarballs are available at:
Detailed changelog:
Download via GIT:
Relevant notes, binaries and packages will be uploaded at:
Modules’ documentation:
What is new in 5.0.x release series is summarized in the announcement of v5.0.0:
Thanks for flying Kamailio!
Posted by Daniel-Constantin Mierla at 6:39 PM No comments:

Time flies, feels like just returning from summer vacation, but it’s already past the mid of autumn and Kamailio members and community member have been present at several event world wide.
After Cluecon in Chicago, USA, which ended the summer events in August, it was the time for TADHack Global 2017, running two rounds during Sep 22-24 and Sep 29-Oct 1.

IIT RTC Conference happened during Sep 25-28, 2017, in Chicago, hosted as usual by the Illinois Institute of Technology.
Astricon 2017 (Orlando, FL, Oct 3-5) was a big hit for Kamailio project, a good location and great time meeting many kamailians and friends from the VoIP world.
November is rather busy, next are the events where you can meet people from Kamailio project:
New events may be added to the list, keep an eye on our website!
Should you participate to a local or global event and involve Kamailio in some way, contact us, we are more than happy to publish an article about the event.
Thanks for flying Kamailio!
Posted by Daniel-Constantin Mierla at 1:33 PM No comments:

The 2017 edition of AstriCon was very intense, or at least it was for me (Daniel-Constantin Mierla, Asipto) and the Kamailio presence at the event. Three days without any time to rest!
Before summarising the event from personal perspective, I want to give credits to the people that helped at Kamailio booth and around. Big thanks to Fred Posner (The Palner Group, LOD), he did the heavy lifting on all booth logistics, from preparing required things in advance, setting up the space, banners and rollups, stickers, a.s.o. Of course, Yeni from DreamDayCakes baked again the famous Kamailio and Asterisk cookies, very delicious bits that people could taste at our booth.

Carsten Bock from NG-Voice was there with his Kamailio-VoLTE demos and devices. Torrey Searle’s giveaways from Voxbone were very popular again. Alex Balashov from Evariste Systems ensured that anyone in doubt understands properly the role of Kamailio in a VoIP network and the benefits of using it along with PBX systems. Joran Vinzens from Sipgate completed our team, being around as we needed.
It was a great time to catch up with many friends, VoIP projects and companies in the expo area, sharing the space with Dan Bogos from CGRateS project, chatting with the guys from Obihai, IssabelPBX, FreeSwitch, Janus WebRTC Gateway, Simwood, Bicom, Homer Sipcapture, Telnyx, Greenfield…
There were four presentations by the people at the booth — I, Carsten, Fred and Joran had talks on Wednesday or Thursday. On Tuesday, I, Fred and Torrey participated to AstriDevCon, as always a very good full day session with technical debates, with Mathew Friedrikson and Matt Jordan coordinating and talking about what’s expected next in Asterisk. 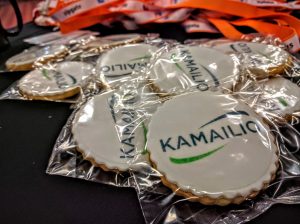 Close to the end of the event on Thursday, it was the open source project management panel, with me among the panelists. Being completely warmed up and with some pressure from James Body, I also did the Dangerous Demos, where the Ubuntu Phone decided to reboot as I was on stage, leading me towards the Riskiest Demo Prize (aka Crash & Burn). Carsten and Torrey did dangerous demos as well, with Carsten being the runner up on one of the tracks, which secured him a nice prize as well.
Kamailio related presentations will be collected at:
I expect that recordings of the sessions will become available in the near future from the organizers of Astricon.
During the breaks and evenings, I enjoyed amazing time with friends and kamailians around the world. It’s no time to bore with people such as James Body, Simon Woodhead, Susanne Bowen, David Duffett, Nir Simionovich, Lorenzo Miniero … and many others that I miss to remember at this moment…
Definitely it was one of the best AstriCon ever, credits to Digium and the organizing team! Kamailio had a great time there, see you at the next editions!
Thanks for flying Kamailio!
Posted by Daniel-Constantin Mierla at 1:31 PM No comments:

A short note to mark the freezing of development for Kamailio v5.1 series.
For few weeks, no new features will be pushed in the master branch. Once the branch 5.1 is created (expected to happen in 3-4 weeks from now), the master branch becomes again open for new feature. Meanwhile the focus is going to be on testing current code.
Work on related tools (e.g., kamctl) or documentation can still be done as well as getting the new modules in 5.1 in good shape, plus adding exports to kemi interface (which should not interfere with old code).
The entire testing phase is expected to be 4 to 6 weeks, then the release of v5.1.0 – likely by end of November should be out.
What is new in current master branch comparing with previous stable series (v5.0.x) will be collected at:
Changes required to do the update from v5.0.x will be made available at:
Helping with testing is always very appreciated, should you find any problem in current master branch, just open an issue on bug tracker from:
Thanks for flying Kamailio!
Posted by Daniel-Constantin Mierla at 1:30 PM No comments:

The development of new features for next major release, Kamailio v5.1, is going to be frozen on Monday, October 16, 2017. The master branch received plenty of new features since the release of v5.0, which was out by end of February 2017.
Next release will bring at least 7 new modules (although we are expecting one or more to make it in during next days). Not really up to date, the list of new features is collected in the wiki page at:
After the freeze date, we start the testing phase, which is expected to last for 4 to 6 weeks, then we will have the first release in the 5.1 series, respectively the version 5.1.0.
Shall you have plans to include new features in v5.1, it is time to hurry up and have the commit or pull request ready by end of next Monday.
Thanks for flying Kamailio!
Posted by Daniel-Constantin Mierla at 10:25 PM No comments: