Here we are, the 9th edition of Kamailio Awards granted for the activity related to Kamailio and Real Time Communications during the previous year, respectively 2015. Continuing the tradition, there are two winners for each category. 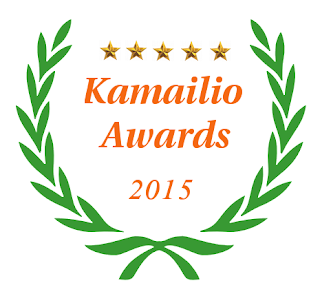 During 2015, Kamailio v4.3 was released and most of the development for upcoming v4.4 was done  (to be released on March 30, 2016). The 3rd edition of Kamailio World Conference was organized, gathering the community of developers and enterprises relying on Kamailio and its ecosystem.

The 2016 is going to be a reference year in the evolution of the project. It marks 15 years of the development for Kamailio project, maybe not a smooth path always, but with amazing results after all these years. We will celebrate it at the 4th Kamailio World Conference, during May 18-20, 2016, in Berlin, Germany.

More of 2016 - after the release of v4.4, the resources will be allocated to design and bring Kamailio to the next level of flexibility and scalability, a project already code-named Kamailio 5.0.

To cut it short here, expect an amazing evolution of Kamailio in the near future. Now back to the awards.

Next are the categories and the winners!
New Contributions
Developer Remarks
Advocating
Technical Support
Blogging
Related Projects
Business Initiatives
Events
Friends of Kamailio
This is it for 2014. If you want to check the previous turn of awards, visit:
Looking forward to meeting many of you soon in Berlin, during May 18-20, 2016, at the 4th edition of Kamailio World Conference & Exhibition, to celebrate 15 years of development for Kamailio Project.

Note: I am solely selecting the winners, with no involvement of Kamailio project members, based on what I observed and has risen my interest during 2015.  Also, a rule that I try to enforce is that a winner of a category in the past will not be awarded again same category (a winner one time is a winner for ever).

Posted by Daniel-Constantin Mierla at 10:30 PM