End of winter, therefore it's now time for the 5th edition of Kamailio Project Awards, granted for the activity during 2011, like in the past, each category has two winners. 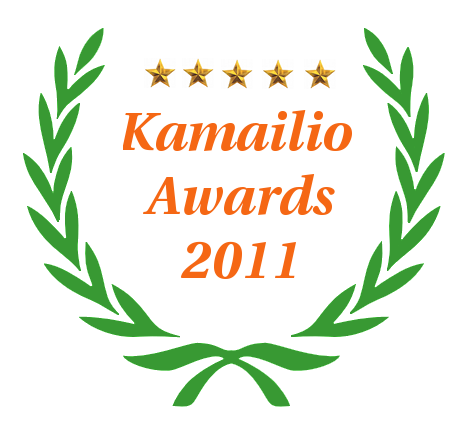 First, I want to thank to everyone contributing to and using Kamailio/SER during 2011, their effort made possible to release a new major version with tons of new features - see release notes for v3.2.0.

The unconventional winners of 2011 are:


The new category this year is Friends of Kamailio, for persons that helped for many years in various occasions, in background or foreground, and were always promoting and saying good stories about the project.

Next are presented the categories and the winners.

Blogging:
Related Projects:
Technical Support:
New Contributions:
Developer Remarks:
Advocating:
VoIP Services:
Business Initiatives:
Events:
Academic Environment:
Friends of Kamailio:
As of Personal Facts related to the project, I continued to release complete tutorials of using Kamailio, very useful and actual would be Bridging IPv4-IPv6 VoIP Networks, Secure Communications with Kamailio (building own Skype service alternative) - see all of them at:
This is it for 2011. If you want to check the previous turn of awards, visit:

Posted by Daniel-Constantin Mierla at 3:00 PM