Three years ago, OpenSER project had to choose a new name due to trademark infringements claims by an US company and Kamailio was the winner name. 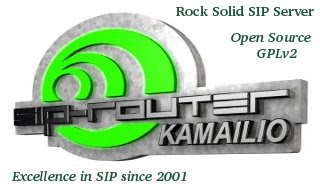 Shortly after, the project faced a new hit, from inside this time, losing the old web domain. The sourceforge.net OpenSER project (where the source code was hosted) was the one showing the relation between the old name and new name, and the truth about whole thing.

Practically, from that moment Kamailio had to build a new brand from scratch, all the old web references being lost at that time. Despite the pessimism of many people and fighting FUD spread by cowards, I believe we succeeded to continue developing a great application, delivering a rock solid open source SIP server, withing a collaborative environment and open community.

I had no doubt about the success, just read (or google) about who is involved in management of the project or where are the people with relevant impact in the development of the project over the year (config file, database API, variables framework ... more to come soon on this blog).

Note that in present time the devel team is completed by the folks at SER project, Kamailio and SER are effectively same application right now, development being done together since autumn 2008 within sip-router.org development framework. To fully complete this picture, we are celebrating soon 10 years since the first line of code, where the major contributors to the project are among the special guests.

Apart of working to remove duplicates (and clarify better the relation and usage of two names Kamailio - SER -- briefly exposed here), the ongoing development of new features blossoms:
All these facts are visible on the statistics offered by Ohloh service - few stats presented in the next graph.

If you are interested in the achievements of past releases since Kamailio name, see the release notes for versions 1.5.x, 3.0.0 and 3.1.x. Next major release, 3.2.0 is planned sometime by mid of autumn 2011.

Right now Kamailio is sitting now on a solid foundation, with a completely re-tailored architecture since OperSER time, suitable for current and future needs of real time communications, sustained by an increasing development team and backed up by major companies in the market. Its evolution is safer than ever.

My greetings to all Kamailians and thank you for your support over the last years! I am looking forward to meeting as many of you as possible at 10 years SER conference in Berlin, September 3, 2011.
Posted by Daniel-Constantin Mierla at 9:01 PM