Kamailio Project was present at LinuxTag 2010 with a presentation by Henning Westerholt and a exhibition booth.

During the event, Henning was interviewed by RadioTux.de, here you can find the recording (German):

Posted by Daniel-Constantin Mierla at 10:29 AM No comments:

I will give will give a presentation about using Kamailio and FreeSWITCH together to build large unified communication platforms at ClueCon 2010. While the primary communication channel these days is voice, instant messaging and presence gain more users day by day.

ClueCon is an annual 3-Day Telephony User and Developer Conference bringing together the entire spectrum of Telephony from TDM circuits to VoIP and everything in between. The event takes place in Chicago, IL, USA, during August 3-5, 2010.

Looking forward to meeting you there!

Posted by Daniel-Constantin Mierla at 12:48 PM No comments:

Today, June 14, 2010, marks five years since OpenSER project was announced. The announcement was done with the release of version 0.9.4 - the development portal hosted by SourceForge.net being created several days before: http://sourceforge.net/projects/openser/.

It started as fork of SIP Express Router (SER) branch 0.9.x, aiming to build an Open Source project that relies on community and encourages contributions. Over the years, it succeeded to build a stable and very attractive SIP server.

In 2008, under some claims of trademark infringement from an US company, OpenSER was renamed to Kamailio. In 2009, Kamailio received Best of Open Source Networking Software Award (BOSSIE'09) by InfoWorld magazine.

Kamailio and SER teams started to work together again from November 2008. As of January 2010, Kamailio v3.0.0 includes all features provided by SIP Express Router (SER), based on a joint effort of the two teams done under development portal http://sip-router.org.

These days, the two applications share the same source code, the difference is the database structure used to store subscriber profiles and routing rules.

Next major release, version 3.1.0 is scheduled for September 2010, bringing lot of new features, many for first time implemented in a SIP server.
Posted by Daniel-Constantin Mierla at 8:42 PM No comments:

The summer was announced hot for our project. Starting with the SIPit26 in Stockholm during May, several events followed in a row:

The series of events related to project continue during the summer with:

Whether you participate or not to these events, we can meet in the area during dinner time and discuss about Kamailio and SIP Express Router, if you are interested then just drop an email to miconda [at] gmail.com.

Posted by Daniel-Constantin Mierla at 12:44 PM No comments:

Courtesy of Jon Bonilla and SIPdoc.net, latest Kamailio 3.0.x can be installed via apt package manager from repositories hosted by the project. You can find details specific for Debian Etch, Squeeze and Lenny, plus Ubuntu Lucid at:

Being hosted and maintained by members of our development team, the repositories are updated frequently, giving instant access to latest stable snapshots. Enjoy!

Posted by Daniel-Constantin Mierla at 12:42 PM No comments:

Location is Hall 7.2, stand 106, near by StrongSwan project and Snom.

Come and meet some of us, we will be glad to chat about Kamailio, SIP Router, SEMS, SIP and VoIP in general. Depending on the day, you can meet at stand:

We will have a demo running latest version and nice flyers to show the capabilities of Kamailio based platforms.

Posted by Daniel-Constantin Mierla at 12:40 PM No comments:

Henning Westerholt will talk about Geographical Redundant VoIP Sytems with Kamailio, on Wednesday, June 9, 2010, 11:20am, at LinuxTag 2010, in Berlin, Germany.

The presentation is about designing and implementation of geographical redundant Voice over IP systems with the Kamailio SIP router. It goes through an overview about the 1&1 voice over IP backend, some performance requirements for carrier grade VoIP networks and real-world measurements.

Then are some key concepts for building a geographical redundant system are presented. This are for example partitioning of the user base and network load with different means like anycast IP and means of maintaining a shared database state for subscriber data and registration information. Finally some common problems in building bigger VoIP clusters and solutions approaches are discussed.

Posted by Daniel-Constantin Mierla at 12:39 PM No comments:

VoIPToday has published an interview with me, as co-founder and core developer of Kamailio (OpenSER) project. Read it at: 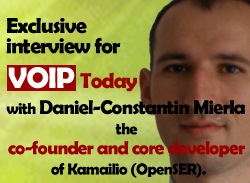 Posted by Daniel-Constantin Mierla at 10:10 AM No comments: