While owning the domain miconda.eu for quite some time, never found the time to set it up. With the winter holidays giving sort of a break, I pointed blog.miconda.eu to my blog (here) at by-miconda.blogspot.com.

The main domain miconda.eu is pointed to about.me/miconda . I plan to make more use of this domain (email?!?), let's see if 2016 brings more spare time ...

Enjoy the winter holidays!
Posted by Daniel-Constantin Mierla at 10:00 PM No comments:

With an amazing 2015 almost gone, it is a good moment to thank and greet the people involved in Kamailio project, old and new friends, developers, contributors, the engaged and warm community members.

Very soon 2016 will arrive, Kamailio will celebrate 15 years of development, therefore we are looking to a special year ahead!

Together with Asipto, I Wish You Merry Christmas and Happy Winter Holidays!
Posted by Daniel-Constantin Mierla at 11:43 AM No comments:

The Kamailio SIP Server v4.1.9  stable version  is released. This is a minor release including fixes in code and documentation since v4.1.8 – configuration file and database compatibility is preserved within 4.1.x series.
Important Note: branch 4.1 is not going to be packaged anymore, v4.1.9 being the last version to be released from this branch, marking the end of the official maintenance for 4.1.x series.
The current latest stable branch is 4.3, at this time with v4.3.4 being released out of it. The project is officially maintaining the last two stable branches, these are now 4.3 and 4.2. Therefore it is recommended to upgrade to latest 4.3.x – be aware that you may need to change the configuration file from 4.1.x to 4.2.x or 4.3.x.
Resources for Kamailio version 4.1.9
Source tarballs are available at:
Detailed changelog:
Download via GIT:
Binaries and packages will be uploaded at:
Modules’ documentation:
What is new in 4.1.x release series is summarized in the announcement of v4.1.0:
See more details about the latest stable branch, v4.3.x, at:
Posted by Daniel-Constantin Mierla at 10:10 PM No comments:

Kamailio SIP Server v4.2.7 stable is out! This is a minor release including fixes in code and documentation since v4.2.6.
Kamailio v4.2.7 is based on the latest version of GIT branch 4.2.  If you are running previous 4.2.x versions are advised to upgrade to 4.2.7 (or to 4.3.x series). If you upgrade from older 4.2.x to 4.2.7, there is no change that has to be done to configuration file or database structure comparing with older v4.2.x.
Resources for Kamailio version 4.2.7
Source tarballs are available at:
Detailed changelog:
Download via GIT:
Binaries and packages will be uploaded at:
Modules’ documentation:
What is new in 4.2.x release series is summarized in the announcement of v4.2.0:
Note: the branch 4.2 is the previous stable branch. The latest stable branch is 4.3, at this time with v4.3.1 being released out of it. The project is officially maintaining the last two stable branches, these are 4.3 and 4.2. Therefore an alternative is to upgrade to latest 4.3.x – be aware that you may need to change the configuration files and database structures from 4.2.x to 4.3.x. See more details about it at:
Posted by Daniel-Constantin Mierla at 9:59 PM No comments:

As of today, December 16, 2015, the Kamailio Project is officially using a new logotype:

Different formats and 3D artwork of the new logo can be found at:
If you do any artwork based on the new logo and you want to share it with the community, we will gladly host it. Please do not hesitate to contact us.
We encourage everyone displaying an old logo of Kamailio to update to the new one at the earliest convenience, it will help propagating the logo. Posting about it on blogs, forums, social media channels a.s.o. is very much appreciated.
The community of the project liked the new logo, we hope everyone else will find it nice as well!
Enjoy the winter holidays!
Posted by Daniel-Constantin Mierla at 9:58 PM No comments:

Victor Seva from Sipwise has published a new module forKamailio, named cfgt. The module is to be part of the next major release of Kamailio – v4.4.0, expected to be out on early spring of 2016.
The module is useful for unit testing, to compare the results of the Kamailio configuration file routing logic. The report of execution is in JSON format, making it easy to analyse. Among the contents of the report can be the values for variables used in the configuration file.
You have to make your test scenario (e.g., using sipp), send the traffic to Kamailio and then check if the report contains expected results.
The documentation of the module is available at:

The functionality of the module is rather small by now, but Victor is committed to add more in the near future, including examples of how to use it. Stay tuned and keep an eye on kamailio.org for updates!
Posted by Daniel-Constantin Mierla at 9:56 PM No comments:

Kamailio project is pleased to announce that the date and location for next Kamailio World Conference and Exhibition were decided – May 18-20, 2016, in Berlin, Germany.

Kamailio project is celebrating 15 years of development in 2016, therefore we plan to have a special edition, many guests that impacted the evolution of the project since its start in 2001 at FhG Fokus Institute.
Website of the event and call for presentations will be launched very soon. Meanwhile, if you haven’t participated at a past edition, you can check the previous edition website in order to get an idea about the structure and content of the event:
Keep an eye on this news feed for updates in the near future!
Posted by Daniel-Constantin Mierla at 9:48 AM No comments:

Proposing a New Logo for the Kamailio Project

During the Kamailio IRC level meeting this summer, a need for refreshing the logotype of the project was discussed. The current (embedded in the upper right corner of kamailio.org main page) is based on the one used for during the former OpenSER name of the project, with changes of the text to reflect the SIP Router and Kamailio names, somehow not longer very balanced, lacking good quality and high resolution graphics. The participants agreed that a refresh would be better than keeping that version.
One option was to reuse the graphics from Kamailio World Conference logo, simply with Kamailio name. It was used even before as alternative logo by various peoples and companies.
We now want to finish this process and we considered also the possibility of a new logo design. Thanks to Asipto and their deal with 99Designs, we ran a design contest and see if someone proposes an interesting logotype. Based on the result of the contest, followed by discussions on management group and the people interested in updating the logotype, we are proposing a new logo for the project:

During the next days we are expecting feedback from community, especially if it looks too similar with other logos they know or if they like it or not. Based on that, a final decision will be taken and either we will switch to the new proposed logo or keep looking for a new one.
Join the discussion about the new logo on users mailing list: sr-users@lists.sip-router.org .
2D and 3D variants in different formats, as well as some combinations with few pictures, can be found at:
As a preview, a few variants are embedded here:

Posted by Daniel-Constantin Mierla at 12:56 PM No comments:

Atom is an open source editor developed by Github. One of its useful features is ability to preview the markdown files while editing them. The Kamailio source tree includes a few such markdown files (e.g., README.md in the root folder). They are nicely displayed when browsing the GIT repository at github.com.
Another feature would be auto-completion suggestion based on the content of the edited file, so, for example, if you define a route block, then its name appears when adding the statement to execute that route.
A syntax highlighting package for kamailio.cfg has been made available at:
Information about how to install it are available in the readme at the above link.
For now, it does rather basic matching of configuration file elements, still relevant to make them easier to spot. Contributions to enhance it are more than welcome!
A screenshot with a part of default configuration:. 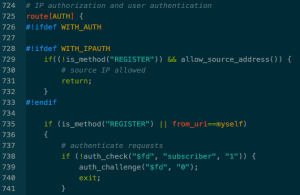 Enjoy!
Posted by Daniel-Constantin Mierla at 12:52 PM No comments: